Go back
Articles/“Shoot It! Shoot It In The Face!!”: The Challenges Of Increasing Immersion In VR

“Shoot It! Shoot It In The Face!!”: The Challenges Of Increasing Immersion In VR

VR is cool. Very cool, but despite the hype, there still remains a disconnection between the predictions of what it is and what it isn't quite yet.

Anyone who has had the pleasure of donning a headset will no doubt have felt exhilaration and novelty of being transported somewhere new. Some are even willing to go as far as admitting that they were tricked into thinking they were really there. Such is the power of the sight that the first cinema audiences ran from a train filmed heading straight to camera and the same awe can be achieved with VR.

How Does VR Actually Work?

The primacy of sight, in the sense arena, is perhaps best encapsulated in a reference that David McCandless makes to Tor Norretranders, in his TED talk. Come on, you know Tor, the Danish physicist who helpfully converted our senses into bandwidths like this: 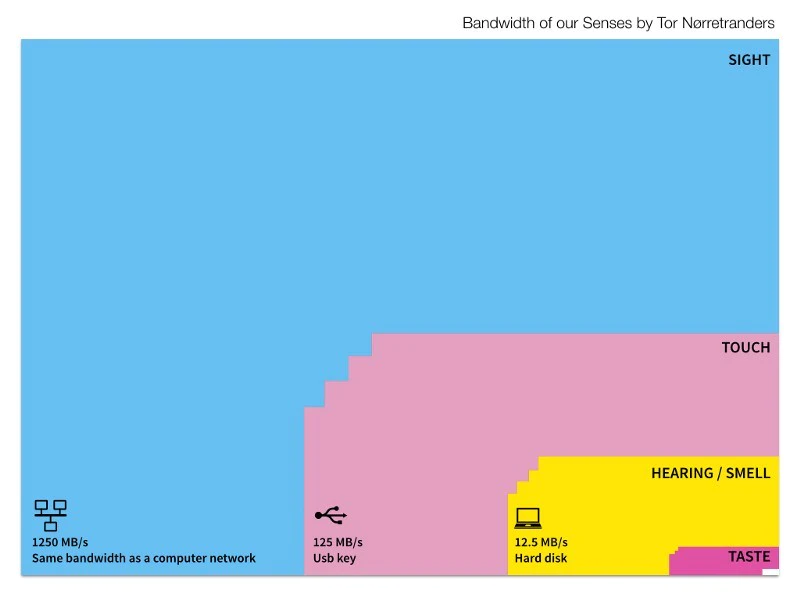 As you can see...sight came out at 1250MB/s, the speed of a computer network, which is seriously fast. The superiority of sight is further justified when compared to the other senses, it is 10 times stronger than the next sense, touch. And 100 times stronger than hearing and smell in joint third place. Although the other senses seem to play second fiddle to sight and touch, they cannot be ignored. It is the combination of senses that allow us to feel movement for example, and this has often been highlighted as the biggest obstacle in the progression of VR, and I agree movement presents a highly complex problem. However, the power of sight and touch in combination is such that mastery of these two senses represents VR’s promising avenue towards greater immersion.

Current VR systems do a good job of highjacking our primary sense and pairing it with 360 audio to transport us to a new world. Most would agree that this experience is superior to television and cinema where successful immersion is more to do with the exploitation of our empathy through absorbing storylines than a true highjacking of our senses. I say senses plural because no sense works in isolation, and it is only with a combination that we can move towards the true goal of VR; namely total immersion.

The above video is a wonderful example of how VR can utilise the combined power of sight and touch. Poor old Ronnie O'Sullivan, snooker champion, falls flat on his face when playing a VR pool game. There is something unique in Ronnie’s fall, namely that both sight and touch are being used in a seamless and familiar way, completely hijacking Ronnie's awareness of his real surroundings. This is what VR aspires to be, so why does it work here and not elsewhere?

The Immersive Feature of VR

Total VR immersion presents a serious challenge and when we refer back to Norretranders it is hard not to notice that most VR experiences seem to have skipped the second most powerful sense; touch. This is probably to be expected as we do not have the technology to manifest an object to match the requirements of a single character's experience even in a very simple storyline let alone something complex enough to be cinematic. That said, VR games, particularly role playing games (RPG), present a chance for us to move closer to full immersion.

The nature of an RPG is that the narrative is created with a single viewpoint in mind, as are the visuals and the audio, this makes it a perfect candidate to begin to address the issue of touch in the VR experience. The best current example is Sony and the imminent release of the VR aim controller.

When playing an RPG, and more specifically a first-person shooter (FPS), the player will be holding a gun pretty much throughout the game. Holding a controller shaped like a gun feels amazing from the get-go but now, paired with a VR headset, it is immersion on a new level.

When you look down, I see my hands on a futuristic assault rifle. As I take one hand off, the visuals perfectly match my physical actions and when I reach back in real space to where the gun should be, my hand is met by physical contact with something that feels exactly what I expect.

There is still more to come but by combining sight and touch in a seamless and justified way, we have never been closer to a world where a man can wear a helmet, hold a plastic gun and feel fully justified in screaming "Shoot it! Shoot it in the face".

Tomas Haffenden
Tomas Haffenden is a Futurist at VERSA. A strategist, thought leader and tenacious problem solver, he brings a rare blend of technical understanding and creative flair.
More articles written by Tomas

Money is dead. Data is currency.

Shhhhh... Why Alexa Is Speaking In Whispers